Cycling to work through Westminster this morning was no different to the four mornings that preceded it this week, St. James Park swans paddled, cab horns honked and the city fell momentarily silent as I free-wheeled along Horse Guards where all you can hear is the ripple of Union Jack flags in the wind above the parade ground. It was business as usual and as I neared the end of my commute my thoughts wandered to the task of finding a new analyst for our team.

Maybe it was the fact that I’ve cycled the same route for over a year but my mind suddenly jolted into some sort of rewind montage, gathering the same routine sites I witness every morning, mashing them together. This groundhog day moment resulted in a miniature epiphany about Analysts and is the reason for this post.

Every day the Landlady of the Westminster Arms sits in a solitary chair on freshly jet-washed cobbles with a morning cigarette studying the Financial Times through her Dennis Taylor spectacles, evaluating how her shares are performing.

The banker in the double-breasted suit, with side-parted lacquered hair pauses every morning to hunch over the St James’ Lake and meticulously hone his camera lens on the swans movements.

The rear entrance to Number 10 is guarded by two armed Met Police Officers who slowly pace up and down behind the black iron gates, scrutinising the speed of passing vehicles and the backpacks of trudging commuters.

Two site foreman caked in brick dust roll up their sleeves and inspect building plans in Soho as a tower crane swings its load noisily overhead.

I’ve always viewed of my profession as an Analyst with some exclusivity, feeling lucky to be part of a group of professionals whose job it is to study the complex and unearth the fascinating. But the montage of moments that my mind had stitched together from my commute delivered the realisation that in actual fact, everyone is an Analyst.

This has helped open my mind to the fact that the role of Analyst does not have a specific profile. It’s not one type of personality in an exclusive group.

Previously, I have felt that the role was misinterpreted by some people, or that it was applied to overly broad areas. In short, how can the person interpreting meaning and forming recommendations have the same job as a person coding and mechanising data systems?
But asking whether someone is an analyst or not is the wrong question.

Analysis is an innate human trait and it manifests in numerous different shapes, which in my opinion is the beauty of it as a trade. 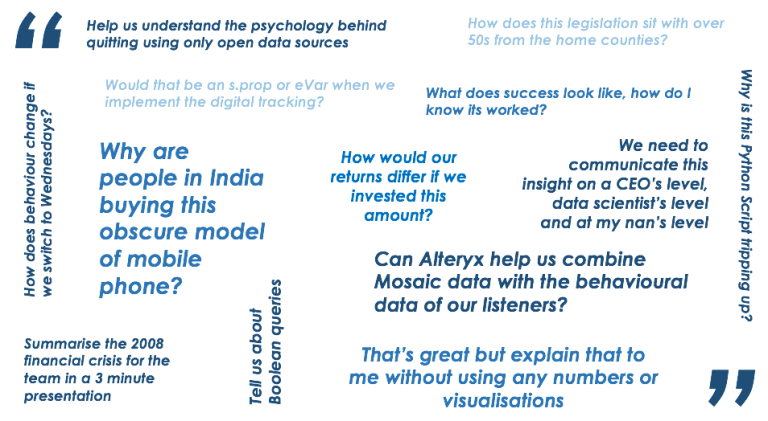 The purpose of analysis is to gain accurate and useful understanding of a concept which is not immediately known or available.

Traditionally analysts wore questionable spectacles, wielded pipets in laboratories and spoke only in binary, but today thats not the case.
To discover genuine insight, we need conceptual minds, engineering minds and scientific minds, we need lateral minds, layman minds, visual minds and creative minds. This forms something of an Analyst Spectrum.

The spectrum joins together to understand the problem, to formulate a plan, to extract and compute data and interrogate the result. It joins together to shape the story, to scrutinise the approach, to facilitate understanding and empower one’s peers.

Some inhabit wider areas of the spectrum whilst some specialise in a small corner of it.

In the communications industry, we should avoid preconceptions about what it means to be an Analyst. Research & Analytics is one of the fastest growing disciplines, irrespective of where you sit on the Spectrum.

So we shouldn’t be asking whether someone is an analyst or not, but rather…

What type of Analyst are you?
(Imagery: Joe Pearman)