Working in contemporary technology today is how I imagine it feels when Lewis Hamilton clocks the green light and squeezes the accelerator on his Mercedes AMG at an F1 Grand Prix, there is a frighteningly strong surge and things quickly begin to blur as the speed becomes almost too much to process.

Take any Steve Jobs or Eric Schmidt quote you like, we live in an era of technological advancement the pace of which human civilisation has never known. In the last few years a popular manifestation of this blistering progression has emerged called the Internet of Things which is the generic term for the varied applications of tech connectivity in our daily lives.

However, something which I find is an increasingly common topic of conversation with my clients and colleagues is the mutation of a superficial and frustrating breed of technological progression, think tech for tech’s sake. Clever but useless. Impressive novelties. We’ve all seen them, the connected refrigerators that can match the temperature of your milk with your current emotion. The smart toilet seat, the integrated sock. Lifeless applications of tech.

Despite the incredible minds operating in technology, despite the constantly evolving real world challenges humankind is facing and despite the towers of financial investment in the field we are somehow still subjected to meaningless tech at a frequency which makes me begin to lose faith.

I was in one such a mood last week, no doubt induced by some ridiculous smart kettle that was trying to do my ironing and – in an attempt to cheer myself up, I fired up my Xbox and checked in with the gaming handles I follow on Twitter.

It was at this point that I saw a Tweet by an organisation called SpecialEffect (www.specialeffect.org.uk).

There was a picture of a young boy in front of a screen and the tweet read “Please watch Matt score his first EASPORTSFIFA goal”. 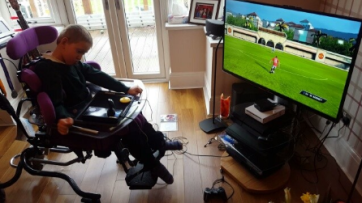 I must confess, with twenty years game-play of EA’s FIFA under my belt I’m slightly obsessed with the franchise and so any mention of it will catch my eye.

I clicked play and my heart exploded.
Matthew has severe athetoid cerebral palsy and quite strong involuntary movements which had prevented him from playing FIFA in the past but I could see from the video that he had some custom controls which had resulted in his magical, top corner goal with the game’s Wayne Rooney avatar.

I related immediately. I myself do not suffer from a disability, I related to Matthew because I too know the joy of pressing the control pad button and unleashing a rocket of a shot which soars past the keeper’s gloves and bulges the net.

I was hugely intrigued. I scrolled and scrolled through SpecialEffect’s Twitter feed and it just kept coming; Alex was playing Minecraft with an eyebrow control, Joseph was using low-force analogue sticks for racing games and Ellie was using foot and head controls to explore the Lego game series.

Countless YouTube stories and testimonials showed that SpecialEffect are a charity who help people with disabilities enjoy video games. 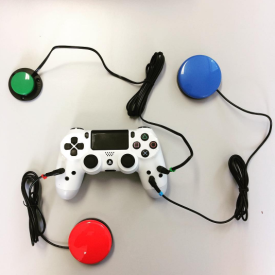 The team produce custom equipment which can use the console or computer’s existing control pad or they can develop something bespoke, all to assist game play. They cater for a huge mix of experiences from world leading titles like EA’s FIFA, first person shooters like Call of Duty or past time games like digital Chess.

SpecialEffect visit people to find out what they want to play, and exactly what they need to play it. They then match, modify or create equipment to lend to them, and give support so they can get the best out of it.

Gaming today is one of the most popular activities on earth; the association for UK Interactive Entertainment (UKIE) recently quoted the global gaming population at 2.2 billion. Another example of its dominance was in 2015, the launch of the aforementioned Call of Duty iteration (Black Ops 3) didn’t just beat its game competitors, it surpassed all theatrical box office, music, and book launches that year.

SpecialEffect have simply asked the question, why do those with a disability only get to watch these magical, engaging, virtual worlds? Why can’t they have a go?

It is this questioning which has lead to purposeful technological advancements completely contrasted to those I cited at the start of this story.

The charity is an example of relevant progression, applying technological skill to facilitate something absolutely vital, human joy. In a world obsessed with faux tech, unnecessarily connected things and meaningless novelty, SpecialEffect have hung on to the necessary and the meaningful and have restored my faith.

The title of this story refers to the 1973 quote by futurist writer Arthur C Clarke who said;

“Any sufficiently advanced technology is indistinguishable from magic”.

Clarke was talking about SpecialEffect.

So, I’m primed and ready. The next time one of my friends asks me whether I’ve seen that new smart shower that can edit your PowerPoint I’m going to respond by asking whether they’ve seen Holly, who has severe cerebral palsy but will destroy anyone at Forza Motorsport.